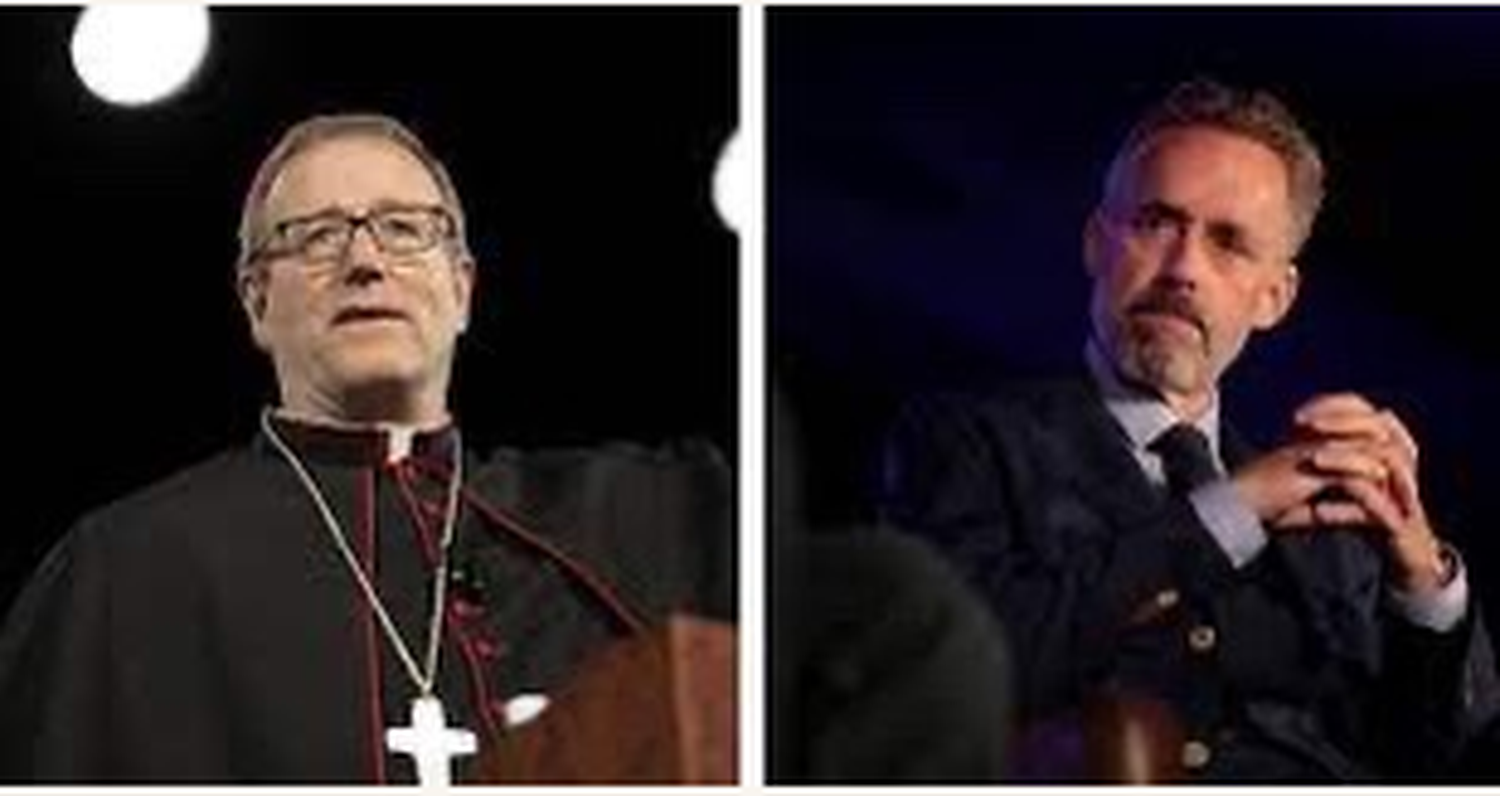 Linked below is what I consider to be an extraordinary conversation between Jordan Peterson and Bishop Robert Barron.  I think the entire conversation is wonderful but if you go to the 105:25 point of the video Jordan Peterson raises the deeply important question of why the Church does not seem to challenge Catholics to greatness anymore.  He views this failure as the primary reason that young people are leaving the Church.  This then leads to a fascinating back and forth between Barron and Peterson that is directly relevant to my discussion of the numbing down of the Church as well as the current series on the universal call to holiness.  I will be posting something new in that series at some point later next week (I am knee deep with farm work and other writing and video projects next week so the next post will be delayed).  However, I will offer just a few brief points on the video below which is well worth the time to watch.

First, one thing that immediately strikes you is the raw, blunt, and almost brutal honesty of Jordan Peterson.  Love him or hate him, his is a voice that should be listened to I think.  His great talent, it seems to me, is his ability to cut to the core of every argument and to ferret out the latent meanings in our often shallow words.  He has a jeweler’s eye for nonsense and for verbal deflections that mask more than they reveal.  And he does not settle for bromides.  For example, when a Christian says, “Christ died for our sins” he wants to know “what does that really mean?”  What is sin?  Why does it need “redeeming?”  Why does the death of an innocent man effect that redemption?  In other words, he is a genuine seeker of truth and wants his interlocutors to take their own ideas as seriously as he does. There are certainly blind spots in his thinking but he is always open to correcting those voids.

Second, I am also struck by the intellectual alacrity of Bishop Barron who displays in his answers to Peterson’s questions the two most important things that an effective evangelist must have: competence and commitment.  His discussion of the Church’s failure to emphasize the call to holiness as well as the post conciliar dumbing down of the Church should serve as ample evidence to his critics from the rightwing trads that he has not “gone beige” in his approach to the faith.  He emphasizes that we “cannot hug people back into the faith” and that we must repropose the faith to modern people in a manner that emphasizes that we are called to something heroic, to include ourselves and our identities in the grand cosmic drama of creation and redemption. And in so doing he makes it clear that this was the true mission of Vatican II:  to evangelize the world with heroic sanctity and with the infectious joy that comes from our inclusion in Christ.

Bishop Barron also underscores a theme that I have written on in the past and will do so again. Namely, that our faith compels us to enter into the sufferings of the world and to bear them within ourselves vicariously as our participation in the redemptive action of Christ.  Indeed, that this is the very meaning of “sanctity” in a Christological register.  Along these lines one cannot but notice the deep Christocentrism of Barron’s approach – – an approach that allows him to see how grace builds on and completes nature and thereby compels us to locate all that is genuinely good and true and beautiful in the world within the movement of the Incarnation.

Peterson is clearly engaged with what Bishop Barron is saying and is genuinely moved by it. You can see the wheels and gears churning in his mind as the conversation evolves and moves from one topic to the next.  I am not posting this video in order to “defend Bishop Barron” or to “promote him” (as my critics accuse me). Bishop Barron is quite able to do that himself.  My purpose is to showcase exactly how this kind of conversation should be carried out as well as to highlight my own emphasis on the universal call to holiness as our deepest obligation as Catholics.

Therefore, and not wanting to get snarky or polemical here, I wonder how that conversation would have gone if Peterson had been speaking to Taylor Marshall or Michael Voris or Archbishop Vigano instead of Bishop Barron.  I often wonder if the radical traditionalists dislike Barron not because they fear his evangelizing style is not successful, but precisely because it is.

Larry Chapp
Miscellaneous
A Married Priesthood? A Meditation on Mandatory Celibacy: The Witness of Damien Alfonso Bergman
A meditation on the discipline of mandatory celibacy for priests in the Catholic Church.

Larry Chapp
Miscellaneous
Interview with Zac Crippen of the Creedal Catholic podcast. Topic: The Constantinian arrangement and its failures

Larry Chapp
Miscellaneous
Book Review by Dr. Larry Chapp in Catholic World Report. A Review of David C. Schindler’s New Book: “The Politics of the Real: the Church Between Liberalism and Integralism.”

Larry Chapp
Miscellaneous
A brief follow-up to my last post: Why I criticize certain kinds of “traditionalists.”