Some Meditations on my Trip to the Abbey of the Genesee: Quo Vadis? 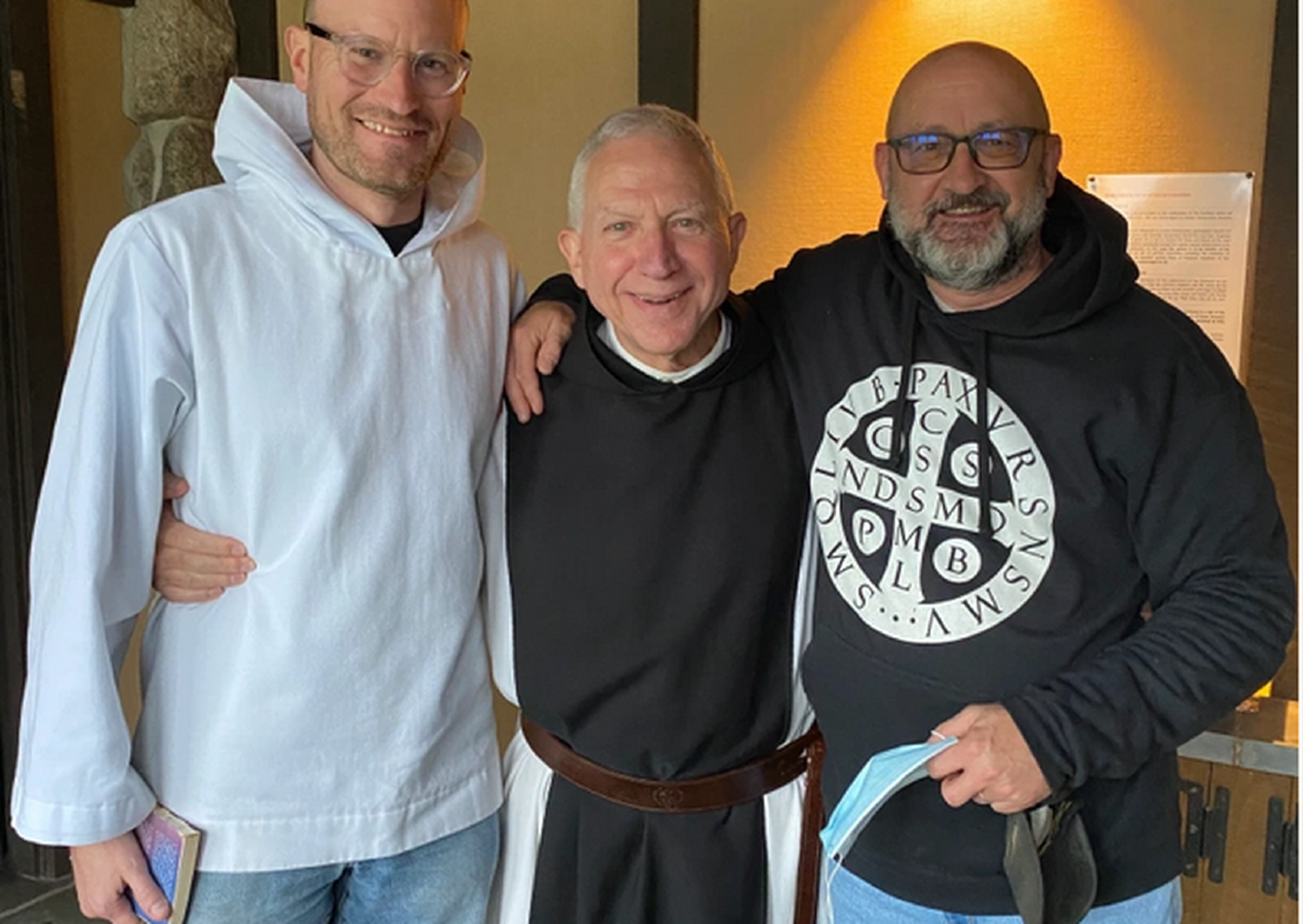 I am back from my short retreat/visit to the Abbey of the Genesee where we were able to visit at length with Fr. John Gribowich, now Fr. Philip Neri.  But no matter the name or the title, he will always just be “Grib” to me.  And I see no disrespect in that.  Many of Pope John Paul’s friends from his youth continued to call him by his nickname (“Lolek,” which means “goalkeeper in Polish) long after he became the successor of St. Peter.  And as far as I can tell, Fr. Philip Neri is doing quite well in his year of postulancy and is happier now than I have seen him in years.  I think the cliché term is that he seems “at peace” with himself and his vocational decision.

But that short report is not the reason I am issuing this blog post this morning.  One of the added bonuses of visiting the Abbey this weekend was that the monks were on retreat and the retreat master was Fr. Simeon from the Trappist abbey in Spencer, Massachusetts.  Fr. Simeon’s original name is Erasmo Leiva-Merikakis – – a name that will be familiar to anyone who has read his masterful, multi-volume work on the Gospel of Matthew.  The photograph above is with him (the one in the middle) along with me (the misshapen ugly one) and Fr. Philip.  In the photo there is a light above my head which appears to be coming from the wall lamp.  At least I hope so since I have no desire to be so cranially luminous.  We were blessed with the opportunity to speak with Fr. Simeon for a couple of hours on Saturday afternoon in the sunny lounge area in the lobby of the main Abbey.  What a joy to speak to a man whose life is a wonderful demonstration of how God often writes straight with crooked lines!  Erasmo had joined a Trappist monastery in Georgia in the mid-sixties, but in his youthful naivete could not negotiate that vocational choice in the midst of the craziness of the post-Vatican II tsunami.  So he left, got his doctorate at Emory, got married and had children.  Along the way he developed professional connections with Hans Urs von Balthasar and a dynamic young Jesuit by the name of Fr. Joseph Fessio who was starting up this strange new venture called “Ignatius Press.”  Erasmo became one of the primary early translators of Balthasar’s works into English as anyone who has read Balthasar in English will know. Indeed, at one point he had Balthasar in his home for dinner, at the behest of Fr. Fessio, during one of Balthasar’s rare visits to the United States.  One has to understand what a vicarious joy this engenders in me.  Think for one second what elation would be in the soul of Garrigou Lagrange had he had the opportunity to dine with Aquinas.  Can you imagine the table talk? “So, Thomas, who is correct on the nature and grace issue? Me, or de Lubac?”  The “respondeo” and “sed contra” would resonate in Garigou’s mind for a lifetime and beyond.

Eventually, Erasmo’s marriage dissolved after which he was granted an annulment and he joined the Trappists once again and was ordained a priest in 2013.  I too have been “married” before and went through the annulment process and am now in a much more profound sacramental and vocational reality with my marriage to my wife Carrie, who also has a Ph.D. in theology and who is both my strongest supporter and my deepest and most trenchant critic.  And so, both Erasmo’s life and my own gives vivid testimony to the fact that “second chances” are nothing of the sort, and represent in reality the Christian’s gradual deepening of his or her sense of vocational “mission.”  Nothing that came before is wasted.  Nothing was a “Mulligan” as they say of errant golf shots among friends.  Regrets over poor decisions in our youth are a waste of time and are spiritually destructive.  You are who you are because of the path you took, missteps and all, and all of it is why you are where you are right now, in the place you stand, and in the world you now inhabit.  In other words, in the spiritual life, we are all nomads like Abraham, awaiting God’s call. George Weigel once told me and my colleague Rodney Howsare over a round of good Scotches after he gave a lecture at DeSales, that Pope John Paul never lived his life looking in the rear view mirror.  The Gospel beckons us ever forward and once we put our hand to its plow “looking back” is no longer an option.

But what a joy it was to speak with Fr. Simeon at such length about theological figures that he and I both have revered and oriented our theological moorings around:  Balthasar, de Lubac, Bouyer, Congar, Guardini, Ratzinger, Chenu, Gilson, Pieper, among many, many others.  It was truly a reinvigorating conversation for me to realize that these theological and philosophical giants are still alive and well in the hearts and minds of many academics.  Because in many ways the ressourcement project stalled after the Council and was replaced with the silly season progressivism of the time.  Both the ressourcement and neo-scholastic thinkers, so dominant before the Council, saw their influence disappear after the Council.  A good analogy would be two armies facing off in a fierce battle to determine who will control the terrain going forward, only to discover after the carnage was over that both armies had been outflanked by a third which had been quietly observing the war from a safe vantage, and waiting for its moment to pounce.  What both the neo-scholastics and ressourcement thinkers discovered was that in the post conciliar Church their moment had been eclipsed and their efforts bypassed and ignored. What became clear in my conversation with Fr. Simeon was that this situation is not tenable in the long term and that for the good of the Church those of us who still care about the Tradition need to make common cause with one another, despite our differences, since the crisis we face needs every devout hand on deck.

And that brings me to my final observation. The recent wars over the liturgy, made worse by the ill-advised motu proprio by Pope Francis (Traditionis Custodes) is a debate over ecclesial penultimate realities that have distracted us from the deeper, and more ultimate, issue at hand: quo vadis? And like Peter we must turn back in the face of that question and set aside our liturgical sniping for the sake of making common cause in helping the Church retrieve her central mission to sing the song of holiness and sanctity in a christological register.  The Eucharist is indeed the “source and summit” of the Christian spiritual vocation, but it is, nevertheless, a means to an end and not an end in itself.  It is He who the Eucharist makes present who is the end and no single liturgical formulation has a monopoly on that presence.  Yes, there is such a thing as “good liturgy” and “bad liturgy” and so the conversation over the TLM and the Novus Ordo should continue. It is a debate worth having.  But lately it has sucked all of the air out of the ecclesial room and in my view we need to take a step back in order to recover our priorities.

I support the TLM and I loved Benedict’s Summorum Pontificum.  But this past weekend I was reminded once again that the Novus Ordo, flaws and all, is also capable of transmitting, not just Christ, but beauty. It can inspire and often does.  Father Simeon said Mass for the community on Sunday morning in the quiet darkness of the Abbey’s main chapel.  The chanting was beautiful, the cadences of the liturgy, as befits one of the Novus Ordo’s main strengths, were simple, spartan, and profound.  I wept silently and with some slight embarrassment, but was filled with joy since I am rarely gifted with the charism of tears over holy things.  And to see my dear friend, Father Philip Neri, standing around the majestic stone altar concelebrating, I was taken back about 20 years to my memories of “Grib” as a young student flush with the excitement of his “prayer and praise” musical group – – something I railed against often to his face – – and felt deep shame over my lack of appreciation for the faith that animated him then. Because it was that same faith that was animating him now, in monk’s garb, and chanting the ancient prayers of the Church, however attenuated in their modern form.  Father Simeon said Mass with a deep, infectious, reverence and with manifest devotion. It was the Novus Ordo in English. There was nothing “fancy” about it. And yet it shook the heavens.

And so I have a simple request for all of my traditionalist friends – – and I have many such friends since as a ressourcement guy I too am a kind of traditionalist as any Catholic must be – – and that request is to keep on promoting and pursuing the TLM. Keep on with your desire to see it celebrated with more frequency in the Church.  Keep on with your thoroughly laudable goal of promoting good liturgy in the Church.  But please stop speaking as if the Novus Ordo is not capable of doing great things as well.  I know this is not all traditionalists, maybe not even a majority.  But many do speak this way and with some frequency.  And I find this unfortunate since it only divides us at a moment when we should be uniting.  And to those who say that the Novus Ordo is rarely done “properly” and is usually a banal affair I can only say that I agree. Which is, at least in part, why I attend an Anglican Ordinariate liturgy.  But even the TLM and the Ordinariate liturgy are capable of being done poorly. The unfortunate plasticity of the Novus Ordo does lend itself to greater abuses and when it is done poorly it is worse than a TLM done poorly.  But that does not change the fact that the Novus Ordo is capable of transmitting and provoking holiness when done with beauty and reverence.  I know it can be since I have seen it.  I saw it at Genesee.

Therefore, I do continue to support Pope Benedict’s desire for a “reform of the reform” of the liturgy.  It is another reason I attend an Anglican Ordinariate parish. Because in many ways I think its liturgical form is the reform that many of the Council fathers had in mind. Mass in the vernacular with the canon prayed out loud, but with all other traditional aspects of the liturgy intact. It can be done and, more importantly, it should be done.  And because it should be done, I refuse to give up on it.

My prayer at Genesee was a simple one and I repeated it often: that holiness and the beauty it spawns be not a stranger in any of our liturgies. Perhaps we should start there.

Larry Chapp
Defense of Vatican II
Vatican II as a Ressourcement Council. Part One: Father Robert Imbelli's Conciliar Retrieval
Vatican II has come under heavy fire from many quarters these days as a "failed council" that should just be ignored. In this first post in a new series on Vatican II I defend the council as truly profound. It was a ressourcement council and Father Robert Imbelli's brilliant analysis makes this clear.

Larry Chapp
Defense of Vatican II
Were Vigano and Marshall Right After All? No